Monique Tarée, a talented Dutch woman who fell in love with Honduras

This week I was featured by Televicentro HN, a TV channel in Honduras. The article was in Spanish, so hereby for my Englisch speaking friends to read the story!

Lets meet Monique Tarée, a talented Dutch woman who fell in love with Honduras and shows the world the beauty of this country. Roatan always opens her heart to thousands of tourists who come to enjoy its beaches, sun and entertainment. But on this occasion a European woman gave her heart to this island. This is the story of Monique Tarée, originally from Amsterdam, Netherlands, who fell in love with this beautiful island, in the Islas de la Bahia, on the Honduran Atlantic coast at first sight.

How is it possible for a woman from a first world country to abandon the comforts of home and live the rest of her life in Roatan? Honduras is said to have magnetism to those who visit it.  At the same time thousands of Hondurans emigrate to seek other opportunities abroad. And many Europeans and Americans choose to come to settle in the Bay Islands and Monique’s history is proof of this.
https://www.youtube.com/watch?v=6huDnwM7PD8 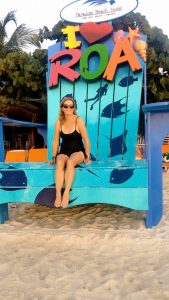 Tarée decided to make her first trip to Honduras in 2007, because her inlaws moved to the Bay Islands. These islands have the reputation of warm climate, beaches with white sand and coral reefs. All of this captivated the Dutch lady and she decided to stay for a month. The small territory of Roatan is located 56 kilometers from the Honduran Atlantic coast.
It has won “Traveler’s Choice” by Trip Advisor multiple times and is placed according to the tourists themselves as the third best island for vacations in the world.
Monique abandoned dreams to return to her country of the windmills and Tulips and relocated her dream to the Honduran Atlantic paradise. Her life in Amsterdam was not equal, so she decided to fill her suitcase and come to settle in the heart of Central America. 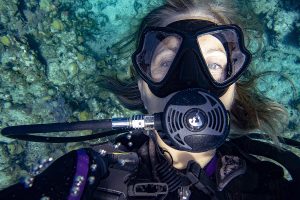 The decision
The European couldn’t resist what was offered in Roatan: to be a Dive instructor and an underwater photographer.  “Diving I do since the 1990s, I did my Open Water course in 1995, but I have been already working for ten years as a teacher of diving and in the last 4 years I started with my underwater photography. Previously I worked in Amsterdam as a photographer for my magazines, but when I came to Roatan I became totally hooked on my underwater photography.”
Explaining the reasons why she decided to settle in this country, emphasizes the climate is unique in the world, and allows you to dive pleasantly, which she reveals as is “her passion”.The new inhabitant of the island has a son and wants to see him growing up quietly in Roatan. Her son is also a scubadiver. She does not hide her happiness and emotions in her work. 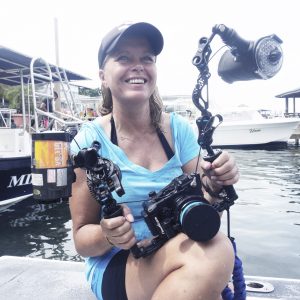 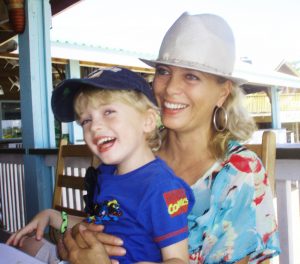 “I think that once I am in the water I see nature as “art”, I like to express in my pictures the beauty of the marine life and to inspire the public what a different world it is underwater. When I look at the different types of corals I imagine them as a piece of art that I can use in my portfolio or for a design on my tote bags and other products.” She hopes for her future: “I am teaching diving and taking marine photographs for my whole life, I hope to stay healthy to do so.” 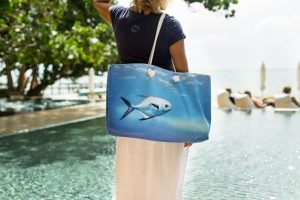 Honduras remains among the most violent nations in the world and immigration rates are high. With the country’s history all Tarée can do is reflect that despite the negative, the country is blessed with noble people that makes tourists want to explore the green mountains, mighty rivers and above all beaches of the Bay Islands. That has become a compulsory destination for successful cruise ships in the world.
Roatan’s beauty charmed Tarée to leave her home and live here as a citizen. She hopes for peace development and see her child call Roatan his home.
https://www.facebook.com/televicentrohon/videos/233329344025112/UzpfSTc2MTQxMDM3NzMyMzYzNToxMzc2NzA4MzkyNDYwNDk0/?timeline_context_item_type=intro_card_work&timeline_context_item_source=1791493778&fref=tag
Share this:
2277
5

As a publisher and photographer of Dutch high-end magazines she worked, traveled and dove in Eilat, Sharm el Sheikh, the south of France, Bonaire, Maldives, Mauritius, Mozambique and finally Roatan, Honduras. In Roatan, Monique fell madly in love with the ocean. So she decided to turn her hobby into her job. She has been ‘recreational’ diving since the 90's and working as a PADI dive instructor since 2009.

Sorry, the comment form is closed at this time.